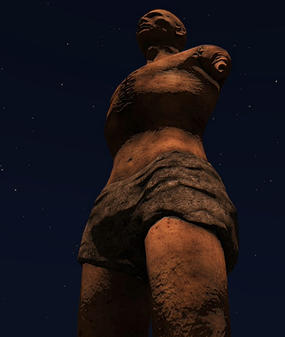 The armsless lost soul looking for the hug he will never get.
Don't get too close or he just might blow up in your face.

- In the final months it became apparent that the world was doomed.
Military communications broke down leaving factions working from their own, individual, internal command structure.
Coupled with the madness that settled in during the final months, when harbouring the disease, civil war broke out.
The Sappers are the result of sick and twisted experiments derived in the mad plague infested minds of the scientists in the final hours of the civil war.

Although mostly lobotomised the sapper still holds a thread of humanity.
Using their natural urge to either seek out companionship or, in the case of the prisoners used, their urge to kill,
the sapper will aim for any living people in the area.

In the early days there were issues with the experiment, participants would manually trigger the bomb early or aim for their handler.
This lead to the removal of their eyes and arms, a tactic that worked out very well, for some..

- The sapper will appear to try and circle the player, always aiming to approach from the rear.
This apparent behaviour is a result of the internal struggle going on in the sapper, he knows he is going to detonate,
and struggles against the compulsion to approach other humans.

- He will occasionally loiter in an area, like all of us he loses track of what he is doing now and again.

- Allow him close enough, and dependant on his anger levels, he will charge until he is within his detonate distance and then trigger his payload.
Distances and times vary as he struggles with the urge to stay alive.
The surgically implanted C4 has a devastating effect on all nearby people, animals, vehicles and the sapper.

- Sappers are known to nest in structures. This is a very rare occurrence and nobody really knows why they adopt this behaviour.
If a nest is found it is highly advisable to avoid the structure.
That said, there are stories that scavengers have managed to plunder nests… Very carefully.

- The sapper will target the nearest warm bodied human.
He has a keen sense of smell, as this is one of the only senses left, so expect him to target sweaty players.

- Within a few seconds after death, the sapper will emit a highly toxic green gas.
This gas is highly incapacitating and very damaging to the players health should be avoided at all costs.

Another variety of the Sapper you will encounter, The "Boss Sapper". has a darker skin tone and a bigger belly.
The blast from this Sapper is not something to play with,
it will devastate the area killing everyone within the blast range.
If you encounter this Sapper killing it from range is by far your best, if not only, choice.
Best of luck..