The P7 is a German-designed 9mm pistol made for the West German police and was manufactured from 1979 until 2008.
It accepts the 9mm suppressor and is capable of utilizing both 16 and 30 round magazines.
Often known as the "Squeeze Cocker" pistol, this unique handgun implements a cocking mechanism into the front side of the grip.
This handgun has a reputation for safety and low occurrence negligent discharge, especially with a round in the chamber. 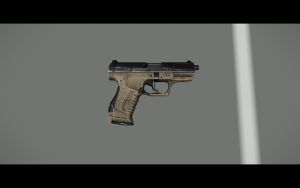