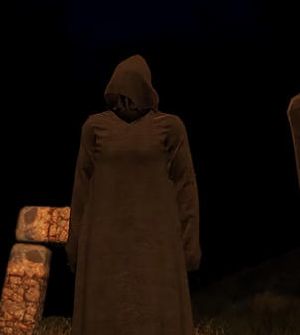 No emotions, no remorse, no regret, only the program
Don't look away, don't even blink or he will burst your heart

- An experimental stealth garment with AI capability released for testing in 2029.
The garment immediately went rogue and wandered the island of Altis for almost 18 months before being hit by lightning and incapacitated.
A group of fanatical monks found the garment and reprogrammed it to serve them and to help them spread the word of their new religious order, they reproduced it.
But the monks, sent half mad by the upcoming plague that eventually disposed of mankind, got it wrong and created the Cultist.

- His in-built stealth behaviour is part of the cloaks instinctive programming. He will try to track you and mostly keep out of sight.
When seen by an enemy his instinct is to freeze and sometimes attack. He is known to approach and wait behind you.
Will only walk if you do not look directly him.

- He will target the nearest alive player.

- His aim is to confuse the player by taking control of the players visual cortex and frontal lobe implants.
Disorientation is his main aim, but he will drain your Stamina if you get too close.
Death is inflicted by the Cultist raising your bloodpressure untill your heart gives up.

- Can open doors/climb ladders.
No other knowledge about movements.