NOTE : CONSTRUCT WILL NOT BE RELEASED UNTIL TESTED THOROUGHLY ![edit | edit source] 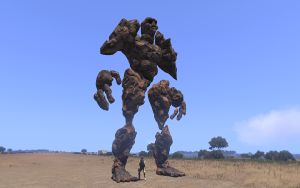 What would happen if nanotechnology found it's way into the environment and left un-checked ?

- Nano Bots originally designed to keep the streets clean by breaking down and powering themselves with litter,
these 'cleaner bugs' were designed to only survive in urban areas,
requiring periodically placed stones to survive and hold off their self destruction trigger.

- These 'cleaner stones' were manufactured and supposedly not found in nature. Life found a way..

- The bugs, carried by the wind to remote locations, found a plentiful supply of rock that,
although not the same as their trigger stones, performed the same task adequately after time.

- With a built in basic collective AI, the bots evolved.

- Initially they could be spotted as odd looking rock formations resembling a termites nest.
These structures became bolder and larger.
Over time there were reports that some of these structures had moved,
they were laughed off as the obvious pranks that they were or sun stroked travellers tales.

- Until one day a group of climbers, out for the weekend on one of their regular outdoor pursuits, vanished.
A search of the area was launched and their bodies were found almost un-identifiable and seriously bludgeoned.
Traces of stone led the investigating officers to assume that they were murdered, beaten with rocks.
Technically they were murdered, just not by another person.

- This is believed to be the first recorded human contact with what is now known as Construct.

- There is some speculation that the nanobots had human 'help' in their evolution.
Others argue that they were perfectly capable of evolving this way all by themselves through random selection.
The biggest questions are, can these bots be defeated and will the Construct stop growing ?
Some day, will Earth just be one large Construct orbiting the Sun ?

- Construct has ears and eyes but these are just cosmetic, so eyesight and hearing are weak.
It's looks sparked furious debate as to the Construct being 'made in Mans image',
interestingly this is believed to be one of the arguments that finally divided religious groups around 2028.
The Un-Scorched Earth Movement (USEM) say that the construct is Mother Earths way of using our technology against us
to finally cleanse itself of our presence.
The bots are the eyes, ears and feeling.
They are highly sensitive to seismic vibrations.

- Not known to pursue their targets over much distance they are quite easy to escape from and due to their size are not likely to sneak up on anybody.
Their purpose still seems to be tidying litter, they just see people, vehicles and buildings as the litter now.
They have been spotted 'playing' with animals, sadly the animals usually end up flattened.
Dead animals are a good sign that a Construct is in the area and to retreat at your earliest convenience.

- Their natural environment is in the mountains, usually found near to their 'birth' rock.
Un-confirmed rumours claim that one was taken down and mined by the military just before the collapse.
A secret report details that they may be, quote: "growing / evolving a rudimentary internal 'structure', it's purpose is unknown at this time.
These internal structures and some external "parts" were found to be made up of rare earth metals, precious metals and a ferrous / strata type
substance of an unknown origin."

- The base where these reports were found was discovered was levelled to the ground with no survivors.
No trace of the supposedly captured Construct where to be found.
No further reported attempts to capture a Construct have been made at this time.
It was hoped that they may start fighting and destroy themselves eventually.

- As it happens, when observed from a distance they appear to be almost friendly toward each other
and behave like an inquisitive animal when alone, in stark contrast to their behaviour once their core task is triggered.
Seeing more than one together is so rare that reports of this behaviour are currently considered sketchy at best.

- If Construct spots you, leave the area immediately !
Or, call in a Tank, two Tanks.. Whole Tank divisions, Artillery and some air support !

- If there are other ways to bring Construct down aside from massive brute force, these ways are still Unknown at this time..

- Will roam the entire map.
Little knowledge about movement patterns.

- Usually found near to their 'birth' rock, in their natural environment of the mountains.